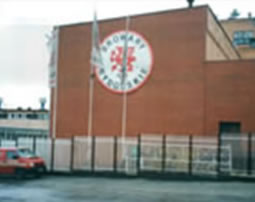 In Browary Bydgoskie, Poland, we were shown a manway door taken from a tank that we had lined some years ago. The tank had been drastically over pressurised and the door was forced out, bending it in places by approximately 45Â°.

However, the lining that we had applied several years before had not cracked and was still in perfect condition despite the severe treatment it had received! Over a period of three years, we lined all the beer fermentation and conditioning tanks in the Bydgoszcz brewery group, which amounted to several hundred tanks.