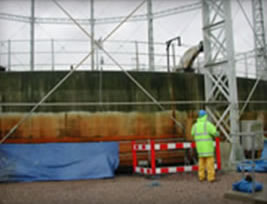 Transco had a problem with one of their gasholders in the North of England, which was currently out of service due to a failure in the water seal. The brickwork that held the water seal in place had become porous just under the coping stone and two brick levels down. Transco was concerned about the impact to the environment should a leak occur.

We commenced the refurbishment works by high pressure jet washing the surface with a biodegradable degreaser. A floating pontoon was placed into the channel to stop debris falling into it. We then lightly shot blasted the surface of the brickwork and coping stone to remove any further surface contamination and to create a strong mechanical key on which to apply the sealing system. The entire area was jet washed again to remove any splash contamination.

The area was then rendered with a special render mix and a water tolerant primer coat was applied. Once cured, we applied two coats of water tolerant and chemical resistance main coating. The top coat was grey to blend in with the body of the tank.

Despite the terrible weather conditions, we were able to complete the project within four days. The water tolerant coating was applied onto a surface wet with constant running water. We are pleased to say the adhesion to the substrate was excellent.